I'm not embedding the spreadsheet this month because with the birth of a new year, I am planning a new approach to these posts. The "What I'm Playing/What I'm Paying" Google Spreadsheet is still there for the previous months.

With 2010, I am pledging to move this blog towards PC gaming as a whole instead of just MMOGs. I've dedicated a lot of time over the past ten years to MMOGs, but I have played a lot other games as well.  I have ignored talking about many of those games and I want to correct that.

Changes for my What I'm Playing/What I'm Paying posts

First, I am putting myself on a stricter gaming budget.  Subscription MMOG diehards will argue until they are blue in the face at how "cheap" it is to pay $15 a month for dozens of hours of entertainment.  $15 x 12 months = $180 is my budget for gaming in 2010, starting as of Christmas 2009.  My goal is to have a varied PC gaming experience, including MMOGs, FPS, RTS, and web games.  This is NOT meant as a way to prove anyone wrong!  It is a way to show that $180 can buy a wide variety of gaming on the PC if a gamer is willing to be conservative and play some games they have missed over the years. 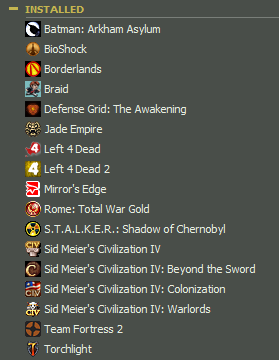 Secondly, I have loaded up on games via the Steam Holiday Sale.  I have purchased everything from BioShock

.  Most of these games are on sale from $2 - $5.  At approximately $35 total spent, I feel like I have an entire year's worth of games saved up (and there are three days left for the sale!).

Anyone can buy a bunch of cheap games, but it takes some dedication to actually play them.  A two dollar game is a waste of money if it never gets played.  To alleviate this problem, I am going to have a game(s) of the month as part of each post.  For example:  January 2010 will feature Mirror's Edge.

After each month, I will give a mini-review of the game(s) of the month as well as discuss the others games I may have played.

I will also calculate the amount of time I spent playing each game every month and figure it into a total money vs. total time spent playing equation to determine the value I am getting from each game.  To help track this, I have a decision to make:

Raptr is a newer tool meant to combine multiple IM platforms as well as track how long each game is played.

Having used both together for a month now, I am leaning towards Raptr.  It tracks more data, has better reporting, and a better website.  Xfire will be going bye-bye (again).

These are general ideas, not laws that cannot be broken.  The budget isn't set in stone and I am more than willing to break it for a good game (WoW:Cataclysm being a possible budget breaker this year).  It is quite possible this splurge in spending on older games via Steam will be a wash and I will never play some of the games.  Also, its possible a change from MMOG blogging to general PC gaming blogging will kill my readership.