is a racing puzzle game, not an action FPS.  The

understood, the sooner the game can be enjoyed.  Forget that there is gun-play, this game is all about getting from point A to B in the fastest time and most efficient manner.

The only game I can compare Mirror's Edge to is Portal

. Both games are frustratingly hard and require copious amounts of trial and error.  The levels are NOT meant to be beaten the first time through.  At some points, both games almost demand the player goes to YouTube to find a walkthrough video. 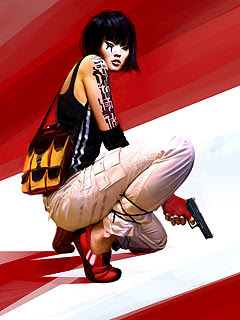 Both games seem to make the complex simple and the simple complex. Many times while playing Mirror's Edge I would easily complete a complex running jump only to miss the next basic jump across a two foot gap. My guess is that so much trial and error goes into the tricky parts, that players unknowingly let up on the easy stuff. Still, sometimes I think the game just wanted to punish me for figuring something out.

After mastering a level, there is almost no challenge the second time through.  Re-playability is limited to those looking to beat their previous best. 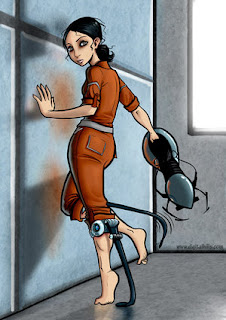 Neither game features a UI. And with so many near misses and vertigo-inducing leaps in Mirror's Edge, a UI would have ruined the experience.

Like Portal, the story for Mirror's Edge serves little purpose other than giving a backdrop to the game and motivation for completing the levels. The story in Mirror's Edge isn't that bad and the world is fairly interesting (and beautifully rendered).

For characters, just as Portal features GLaDOS, Mirror's Edge features Merc (short for Mercury) as the overseeing director of activities. Fortunately, the leading lady, Faith, tends to speak up for herself in Mirror's Edge, where as Chell remained silent in Portal.

As a final nail in the comparison coffin, both games are far too short, ending promptly after a few hours of play. Mirror's Edge, well worth the $4.99 spent.
on January 02, 2010