Return to the Galaxy for FREE

Any player that has previously subscribed to Star Wars Galaxies

will be able to play the game free of charge between February 1st and March 1st.

No, this is not out of the kindness of SOE's heart.  Its an offer to promote their upcoming Galactic Civil War expansion: Forces Under Siege.  This would be the expansion where SOE finally realizes that there is a galactic civil war occurring during the Star Wars classic time line. 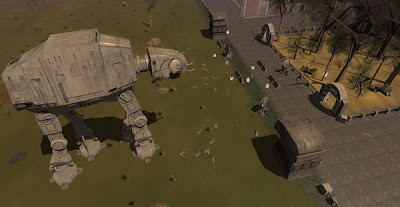 Any old-school player (that means pre-NGE) will probably remember little to nothing about the galactic civil war from the original game, because there wasn't one.  Sure, Rebels and Imperial scum could chase each other around and spam knockdowns, but it was for no gain to either faction.  It was nothing more than a constant gankfest at each of the spaceports.  It sucked.  No, it really, really sucked.

However, the new expansion approach to the GCW isn't going to tempt me back into the game.  I only mention it because its a free month of play for a MMOG, a Star Wars MMOG no less.
on January 29, 2010