Lifehacker is one of my favorite websites.  Not because of the great writers, but because of their timing.  Everytime I need something, Lifehacker finds out and posts something useful.  I swear they are spying on me.  First it was a detailed Thunderbird tweak guide, then Dropbox hacks, both published within days of my installs of both.  The list goes on.

The newest example is a post today about GameSave Manager, a tool that backs up saved game files for over 400+ games. It was not a month ago that I gave up playing Bioshock

after losing my save files during a reformat of Windows 7.  This was after already restarting the game one time because of poor planning.  Oh, and I was making backups the old fashioned way, but the one day the backup failed is the day I decided to reformat!

Also, recently I lost several hours of progress in my save game for Mass Effect.  After that incident, I implemented my backup scheme for saved games by syncing the folders to Dropbox.  That way I have saved files on all the computers I connect to Dropbox with.  It works wonders for Civilization 4 games since I am usually manually saving them.

However, it is annoying to have to add other games by hand to my backup scheme.  Even more so when it takes five minutes on Bing to find out where the actual saved game is stored in Windows 7.  GameSave Manager takes care of all the prep work and then makes it easy to restore from the backups it makes. 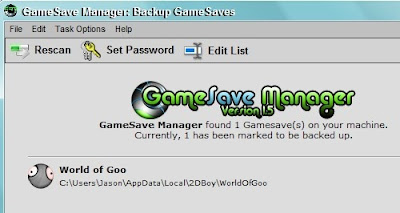