The game of the year edition of The Elder Scrolls 4: Oblivion

went on sale this weekend via Steam for $8.50.  It's a steal of a deal and I couldn't resist picking up a copy for myself.

There is always a question of how successful these fire sales on Steam are.  To provide some anecdotal evidence to their success, I present the previous 7-days of game-play tracking via Raptr for Oblivion. 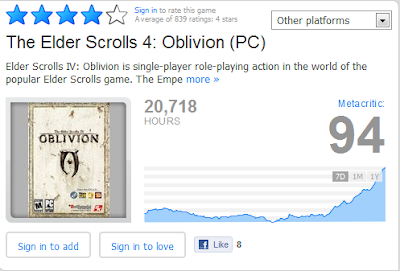 As can be seen, there is a pretty good spike following the start of the sale this weekend.

While hours played are not easily equated to sales, and factoring in the sales price, it is tough to determine what revenue this generates for the game developer.  However, a cursory glance tells us there are plenty of players playing the game and that has to warm the heart of any developer!
on June 12, 2010 1 comment:

And we're caught back up. May 2010, the month I lived out of a hotel, but still only managed to put in 15 hours of gaming.

I have embedded the new What I'm Playing/What I'm Paying spreadsheet for May below.  The overall spreadsheet (includes previous months) can be found here.

Game of the Month

is a shining example of how to make a game.  Developed on budget, by a small and dedicated team, it delivers everything one would want in a Diablo-clone.  There are monsters, loot, and random dungeons galore.

I spent 14 hours hacking away at the game.  I came to close to beating it while seated in my hotel room, but the end boss did not fall until I returned home in June.  Even with the end boss downed, there is so much more to accomplish.  There is a never ending dungeon in the game, so a character can level forever (I assume).  Or if it fancies a player, they can retire a veteran character and start a powered-up new character with the retired's equipment.

The combat is smooth and clean.  The various classes and abilities are simple to use and graphically brilliant.  The monsters can get repetitive, but when players are killing hundreds of them per level, its an acceptable mark against the game.

I highly recommend Torchlight and it can often be found on sale for anywhere between $4.99 and $9.99.
/Played

I originally planned to put some time into a new Civ4 game during May, but Torchlight quickly won out.  I'm not sure, but I think I may have burned myself out on Civ4 after only ~30 hours.
/Paid

As promised over a month ago, I am finally catching up on my What I'm Playing/What I'm Paying post (subbing d's for ing's, past tense and all that).

April, as a month in gaming for Heartless_, was as exciting as watching the Detroit Lions play a random High School football team.

I have embedded the new What I'm Playing/What I'm Paying spreadsheet for April below.  The overall spreadsheet (includes previous months) can be found here.

Game of the Month


Don't let the total playtime fool you.  I liked Bioshock

, but between a bugged out Big Daddy and failed game save backup forcing me to restart twice, I just didn't make any progress.  By the time I turned around, April was over and I was scheduled to be out of town most of May.  My poor laptop just couldn't manage Bioshock reliably enough to provide a good play experience.  I've shelved the game for completion and commentary at a later date.

Upcoming Game of the Month  for May: Torchlight

(because it runs like a dream on my laptop!)
/Played

I stuck in an hour playtime with my Melee Healer in Allods Online in April.  I still enjoy the game and wish I could dedicate more time to it.

I continued my enjoyment of BFBC2

in April playing a few games.

I made no gaming purchases during April.
on June 11, 2010 No comments:

Just a quick note.  Magic the Gathering: Duels of the Planeswalkers appears to be hitting Steam on June 15th according to this tweet from Elaine Chase.

Email ThisBlogThis!Share to TwitterShare to FacebookShare to Pinterest
Labels: Duels of the Planeswalkers, Magic the Gathering

After the NGE debacle, no one could have imagined that SOE would be allowed to create another Star Wars MMOG. We were wrong; we were very, very wrong. SOE has announced a new game, Star Wars: Clone Wars Adventures, coming fall 2010.

However, SOE seems to have learned a lesson with the success of Free Realms: casual and micro-transaction supported games can work. Visit their website or watch the video below and it is immediately noticeable that the game is not aimed at the hardcore or even core MMO gamers.

It will be interesting to see how this is received and whether the MMO blog'o'sphere will start writing the obituary for SOE's core franchises like Everquest.