I've run the gambit of thoughts on WAR, my final verdict after months of play was that WAR had pockets of greatness, but the overall design was poor. Also, some technical and stability issues arose directly related to poor design that really aggravated me. However, since quitting, I've wanted to go back. So, I've decided to take advantage of the re-enlistment campaign for Warhammer Online: Age of Reckoning.

With that will come the following list of nifty gifts: 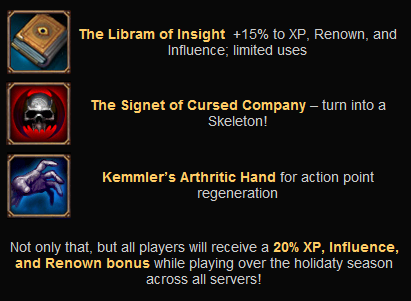 I have no honest plans to resubscribe because I lack the time to make $14.95 a month a justifiable expense.  However, stranger things have happened.
on December 17, 2009