LCD vs Plasma: HDTV buying guide and other stuff I learned in the process of buying my first HDTV

What HDTV should I buy?  Its a question heard around the Internet every two seconds.  Quickly followed by LCD or Plasma?  Followed by more questions: screen size, refresh rate, resolution, etc.  Normally, a quick search on Google or Bing will quiet my concerns about any tech purchase.  In the case of buying an HDTV, Google was worthless, sending me repeatedly to adver-spam sites that do nothing more than duplicate Amazon.com's review listings.  Bing proved a little bit more fruitful, directing me to the helpful CNET Reviews.

What I learned was that I could not rely on a review or single source to direct me to the HDTV that was right for me.  The only way I was going to get a quality television was if I made the effort to research the options and understand from top to bottom everything there was to know before I walked into a store (and know that once I left that store, I was going home to order my HDTV online to save money).

The first step in any HDTV journey is to make a decision: Plasma or LCD.  I falsely assumed that LCD being the newest and most prominent HDTV technology on the market was the path I was destined to follow.  It was fairly late in the game when I discovered that the older technology of Plasma was more than capable of standing up to LCDs.  In hind sight, I should have started looking at Plasmas from day one, right alongside the newest LCDs.

Plasma's get a bad reputation from their early years and the fact they are slowly being phased off the market.   Big name Plasma makers such as Pioneer have already left the market, and others are following.  Any initial search for a list of top 10 HDTVs is unlikely to feature more than a single Plasma.

The main benefit, that I found, for Plasma HDTVs was the price.  The manufacturing process for making Plasma televisions is streamlined, reducing the price.  Comparable sized Plasmas are often hundreds less than equivalent LCDs and with better specs.

Secondly, Plasmas offer a better picture quality out of the box, with deeper blacks and better control over motion blur.  Unlike LCDs, Plasmas do not need to advertise 120hz or 240hz refresh rates, as they handle screen refresh without the need for gimmicky processing tricks.

Also, the off-angle viewing for Plasma TVs is better, so those looking at the TV from one side will see the same vibrant picture as those in front of it.  LCDs are best viewed from the front with noticeable degradation of the colors and sharpness as the viewer moves off-center.

The major downside of Plasmas is power consumption, upwards of two to three times greater than that of LCDs.  However, most new Plasmas are Energy Star rated, which greatly quiets my fear of an energy vampire. Otherwise, many of the downsides attributed to Plasmas are things of the past.

Newer Plasmas have the same life expectancy of tube LCDs (60,000 - 100,000 hours, or about 27 years of average use).  There is plenty of technology built-in to prevent screen burn in (where an image seems permanently stuck on screen, such as a stations logo) and combat image retention (images staying on screen during periods of transition, such as when changing channels).

The only true detractor that sticks to Plasmas is that they don't do well in a bright room due to the fact they require a shinier glass surface which can pick up annoying reflections.  For my situation, our great room is big and dim, so a Plasma was a good fit.

NOTE: Plasmas only come in 42" + screen sizes.  For HDTVs below 42", LCD is the only choice.
NOTE: Plasmas do not do well at higher elevations and should be avoided in those areas.

While it may be obvious from my Plasma section that I became a fan of Plasma over LCD, but it would be a disservice not to talk about LCDs in this post.  LCDs are the prevalent technology on the market. They are far more energy efficient and tackle some of Plasma's greatest skeletons: no threat of burn in or burn out, matte finish to reduce glare, smaller screen sizes available, and no issues at higher elevations.

With newer technologies, such as LED back/edge-lighting and 120-240hz refresh rates, LCDs achieve equal picture quality to Plasmas.  However, LCDs are just now catching up in these categories and there is no set standard and plenty of debate over the benefits of each new feature being added to LCDs.  This leads me into one of LCDs biggest issues: price.

This is not to say all LCDs are over-priced, but the good LCDs that offer comparable specs to a good Plasma are always more expensive.  Not to mention as new features are added (120hz, 240hz, LED, dejudder, etc.) the price keeps going up.  To accomplish the same things that a Plasma does out of the box, expect to be paying more for an LCD.  Plus, more time will be spent researching each of these new features and the affect on viewing.

Why I chose Plasma

At the end of the day, I went with Plasma.  The ultimate test for me was walking into several large retailers (Best Buy, Jeff Lynch, etc) and looking at TVs.  Online research can only accomplish so much and at some point, the TVs need to be seen in person to understand the differences.

The first thing I noticed when walking into Jeff Lynch were the three screens on the far wall.  The picture looked crisper and more vivid than the rest. Sure enough, they were all Plasma screens (and only displaying 720p content).  All of them were hundreds less than the other TVs.  In comparison, there were well over 50 LCD models on display.  Not a single LCD on the floor looked great until I was standing right in front of it.  The lonely three Plasmas looked good from everywhere.  Granted, once in front of the LCDs, most were great and in the theater room at Jeff Lynch with the 65" Sony Bravia

The off-angle viewing was a huge factor in my decision as our great room features 3/4 of the seating off to the side.  Plasmas won this fight hands down and with the price being about $500 less than an equal LCD, I was sold.  Anyways, I am NEVER directly in front of our TV, the dog is!  And I'm not buying this TV for the dog!

While LCD vs Plasma is a tough decision, there are plenty of other things to confuse an HDTV buyer: resolution, brand name, model number, screen size, etc.  LCDs in particular require due diligence on their growing set of options.  What I'm about to break down is what I found to be the important factors: 1080p, screen size, and brand name with a touch of model number.


1080p is the defacto HD resolution these days and while most cable/satellite is sent in only 720p, I found no reason not to go with 1080p.  The price difference, while there, was not enough to convince me to skip out.  Also, I would have had to search pretty far and wide to find a newer 720p set.  Every newer TV was 1080p.

Bigger is better right?  Yes, but size matters based on viewing distance.  I found a handy chart that makes quick work of this: 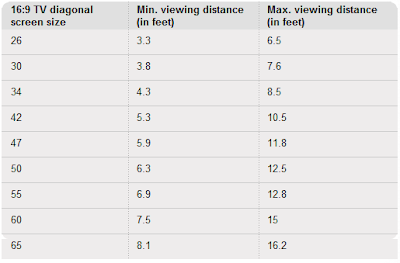 At ~9ft from my couch to the wall, a 50" fell right in the sweet spot.  Too far away with a screen under 50" and I would lose detail and diminish the bonus of having an HD screen.

Brand Name with a Touch of Model Number


There are a lot of HDTV manufactyrers out there and a million models from each (or it seems).  I strongly recommend sticking with a trusted name for a large purchase such as this: Sony and Samsung being the two top names I saw repeatedly.  Often times enthusiasts will refer to the brand names in tiers.

Just to throw a wrench into my smooth sailing, the HDTV manufacturers toss around all kinds of model numbers.  For example there is the similarly named Samsung PN50B550

.  All only one number off, but the differences and prices between each are huge.  The 550 and 650 offer 1080P, while the 650 trumps the 550 with Internet connectivity.  The 450 really shouldn't be included because it features only 720p and is only a budget line.

My advice is to look at the model numbers and determine what differs between each.  Often times, the higher end models will have an extra bell or whistle (such as Internet on the TV).  Without a little research the buyer would never know there is a technically equal TV, minus the bell or whistle, for a few hundred dollars less.  It pays to figure out what the "vanilla" sets are in each line (the 550 being the vanilla 1080p-level set in the example above).

Most local stores will not have many HDTVs in stock at the store, requiring payment for home delivery from a warehouse.  Also, local stores have to charge sales tax.  Online purchases usually don't have sales tax and shipping is often free.  I found very (and I mean very) little reason to buy locally.  I saved over $200 buying my TV online.  If there isn't a super deal locally, head online (I like to use Bing Shopping to compare prices and nab Bing cashback when possible).

The PN50B550 plasma HDTV is perfect for action-packed sports and movies. It uses new e-panel technology which reduces blurring and produces crisp, clear images. And 1080p high definition brings out the brilliance and clarity in everything you see. Plus its unique Touch of Color design turns it into a beautiful work of art. Enjoy a more realistic, thrilling movie night at home with this Samsung plasma HDTV.